Möhrendorf 06.05.2019 – on the 1st of May it was time again: the imbuslers got on their bikes. The summer campaign "Mit dem Rad zur Arbeit" has been going on for over 18 years and up to 200,000 participants are taking part throughout Germany.

Some employees at imbus are also following the campaign. The primary aim is to promote greater fitness in everyday life and reduce CO2 emissions. Of course, not everyone is able to cycle to work. This is why imbus is promoting a conscious approach to health and the environment under the "green imbus" initiative even outside this campaign.

For example, bicycles and e-bikes are made available to employees on request. The company also has a number of hybrid cars that are recharged by the photovoltaic electricity they produce themselves.

"green imbus" has set itself the goal of significantly reducing CO2 production and resource consumption throughout the company. Small measures, such as avoiding unnecessary printer paper, also help to achieve this. imbus also tries to procure the necessary consumer goods, such as food and beverages, sustainably and from the region. 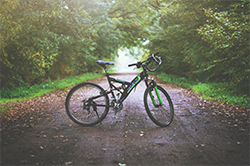